Back to all posts

Coffee and Feelings: I woke up this way #1 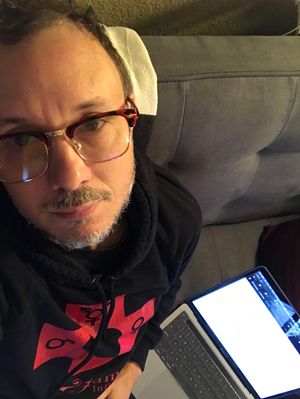 With all the news about student loans yesterday, I woke up and meant to write about what it was to graduate in 1994 with $20k in student load debt and only myself to rely on.  Instead I rambled a little.  In 1994, I was considering grad school and becoming a queer, activist academic when Kristen died.  She was my first girlfriend.  It turned my world upside down and suddenly being an academic seemed trivial.  She was a musician, only 27 years old.  The upside down shake up awaken a feeling within myself that I had buried for a six years.  That feeling that music was the most important thing to me.  I would do this dance with music for the next 30 years.  Giving up and coming back over and over.  Not letting myself do it fully because of so many fears.  Pushing it down, pursuing something more practical, something easier, something shiny and new that caught my eye, doing what needed to be done to pay the bills, only to have music nudge me and bubble up again.  In my last year of high school I had no college plan.  I had no one helping me navigate what I should be doing.  I had a vague parental directive to go to college.  There was no internet, no information at my farm town school.  I knew nothing of application deadlines and was left to figure it out on my own.  My friends were other working class kids who were also getting no parental support to figure out next life steps.  I was just trying to make it though being a queer, trans, freak in a most hostile environment.  So I found myself going to the only school I could figure out how to apply to, my hometown college, University of Wisconsin Eau Claire.  I have dear friends who that school worked for but it wasn’t a good fit for me back then, it wasn’t the environment I needed.  I could dream of other options but I had no way of envisioning how they could come to life.  So I worked full-time at the movie theater while I was in college full-time.  I made $3.35 and hour.  Being a movie theater manager seemed cool.  I liked movies.  It was a fun place to work.  It seemed like a practical job.

My last year of high school when I was just trying to survive, I knew I wanted to go to college for music.  I was a drummer.  I couldn’t read pitches on sheet music, I had no ear training, a few piano lessons as a kid, I was a piano lesson quitter, I was your average lazy teenager.  I only cared to bang on the drums.  I was AFAB so over and over I was passed up for the boy drummers.  I was a weirdo.  I did things like compete in breakdancing competitions.  In a farm town.  In the 1980’s.  Need I say more?  But I also could be organized and had some charisma and was a leader so when our drum line leader graduated a year before me, I pulled ahead a little and filled his shoes.  I got to boss the boy drummers.  My confidence shot up and I spent every spare moment I could in a tiny band practice room, without earplugs (much to my future dismay), banging away on a drum line snare drum.  I took a music theory class with three or four guys, two of them being the rival boy drummers.  Out of that class I did the best job conducting the concert band in a rehearsal of Handel’s Messiah.  Unbeknownst to us, this was an audition to conduct it in concert.  My confidence grew.  I took tiny steps forward but I couldn’t get past the idea of having to do an audition to go to college for music.  I had felt crushed by various auditions and try outs, jazz band, basketball, softball, plays.  The jazz band auditions found me passed over in favor of boy drummers who weren’t necessarily more skilled.  I was terrified of a college music program audition.  So I didn’t go to college for music.  I kicked around aimlessly for two years working at a movie theater, not coming out as queer, trying on three or four somewhat practical majors, stuck in limbo.  1989, I got out and made my way to Minneapolis but the ghosts followed.

Please support my work with a tip! Thank you!