Back to all posts

Coffee and Feelings: I woke up this way #2 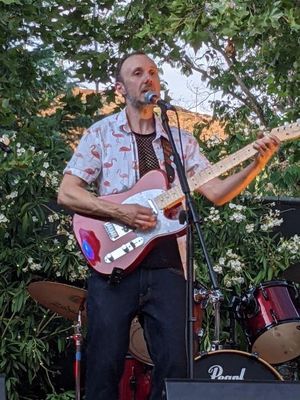 I tell stories at my live shows between songs.  I consider it a part of my set, maybe more interesting than the songs for some people.  I write out a story or notes set list next to the song set list.  I spent most of my adult life thinking I was well adjusted (ha!) and that I hadn't had it so bad as a kid.  When I think about if someone else was telling me these stories I lived about growing up trans in the 1980's in a small Wisconsin town, it was pretty damn crappy.  Trans trauma heaped upon trans trauma.  I was thinking about my set and what stories I wanted to tell at my last live show, almost a year ago, at the Fabulosa Festival (July 2021).  During that glorious couple of months when we thought we had made it out of COVID times.  I told some version of this story during that show.

One of the reasons I love doing this music project is that I give myself permission to be more vulnerable and soft and squishy.  I remember my dad saying something to me, I think it was while I was in in college and was a student organizer, he said that he was worried that I was too serious and worked to hard and didn’t have enough fun.  And while I can agree with some of that, I thought back to how I became such a serious kid.  I grew up trans in a small town in Wisconsin in the 70’s and 80’s.  I didn’t have support for who I was from anyone.  I battled my mom over gender appropriate clothing, in school I was called a tomboy as an insult, my parents were obsessed with listening to James Dobson of the notoriously homophobic Focus on the Family so I was absorbing a lot of queer hatred.  So pretty early on I learned to be outwardly stoic and not show how people were hurting me.  I became a quiet, shy kid.  A queerdo trying to pass under the radar and not have too much attention paid to me because usually that would go negative quickly.  Which was hard for me because I also just had this need to perform inside me.  I became an introverted kid who spent a lot of time alone drawing cartoons and making art out of cardboard.  I became a serious kid because I was facing serious backlash at every turn for who I was.  I’m sure many of you can relate to that feeling of being in constant self-protection mode.  When I was in junior high and high school, if I had the opportunity to pass as male, I took it, which fit well with being quiet and trying to hide.   In college, when I settled on a comfortable way to be a dyke in the early 90’s it was as a stone butch and then by the late 90’s (fast forwarding a bit) I had transitioned to living as a man.  Where I’m going with all of this is that all that quiet, hardened seriousness just wove it’s way seamlessly through all of that to easily falling into a certain male archetype: a strong, stoic, working class guy who fell into a very male dominated profession and took on serious leadership roles.  In my day to day life I don’t give myself permission to be very… soft.  And while this one man band of mine is very reminiscent of growing up alone and being in my room creating things, I push myself to be tender and vulnerable in a public way that 50 year old men aren’t really supposed to be.  I let myself write in a way that might seem a little naive and goofy and childlike.   So it’s really scary to be up here for many reasons.  Besides wanting to share these songs and these stories, I suppose it’s about little Ed and trying to go back in time a little and let him just be his authentic self.